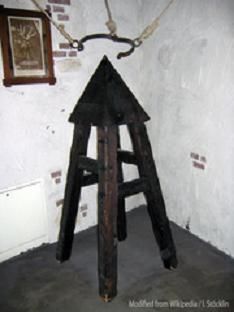 The Judas Cradle is yet another torture device invented by some fucked up guy back in medieval times.  (Although there is always speculation as to when these things were really invented.) Many of them were put into use during the Inquisition to torture heretics. It seems that devices for torturing a person’s sexual organs were a particular favorite. I wonder why they were so fascinated by people’s nether regions. 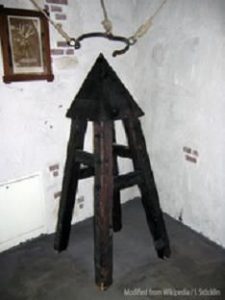 The Judas Cradle was nothing more than a block of wood shaped like a pyramid. It was on legs like a chair. It was meant to penetrate either the anus or the vagina (Sounds like there needed to be a safe word!) There were several different ways this device was used, all with the same result: 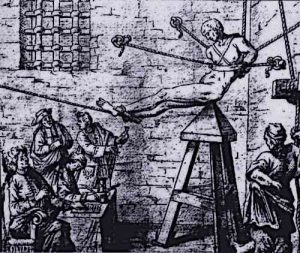 The tip of the pyramid would penetrate the victim, and the further down the pyramid a person went, the more it stretched and tore them. If that wasn’t bad enough – the people in charge managed to find ways to make it worse. The victim’s legs were tied together under the Cradle, specifically to make the pain worse with any foot movements. Weights were sometimes added to the victim’s feet to pull their body down further. Oil was put on the Cradle to increase the pain. The torture could go on for hours depending on the victim’s tolerance.

The victim was sometimes lifted off momentarily or overnight and then dropped back on it.  Just to make it worse – it was never washed. It was covered in the blood, feces, and urine of the previous victims. If they confessed and were released, they would usually die from a resulting infection.

Another similar version of this kind of torture was the Spanish Donkey. It was the same principle, but it was a longer pyramid. This was capable of splitting a person in half. 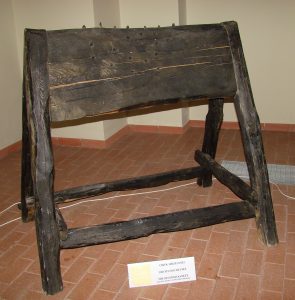