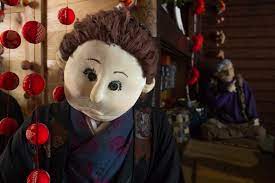 The village of Nagoro, Japan is populated by some unusual residents: dolls. The village had been populated with actual people until the village’s residents either died or started moving away years ago looking for better jobs. There are a little over twenty actual people living in Nagoro and no children. Tsukimi Ayano was one of the residents who moved away, but she missed her home and returned to Nagoro alone. The loneliness was too much for her, so she made a doll that resembled her father to keep her company in the garden. Then she made one for each member of her family. Her collection soon spread.

Tsukimi began populating the town with dolls. She placed them in various locations around the village. The dolls are made of straw and dressed in clothes that correspond to the doll’s location. Farmers in the field, kids in the school, etc. The dolls are called kakashi,  (Japanese for scarecrow.) Some of the dolls resemble people that Tsukimi used to know, while others were created to fill a space. 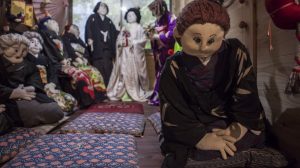 Over time, the village’s “population” grew.  Other people heard about Nagoro and made their own dolls to contribute to the village. There are over three hundred and fifty dolls in Nagoro. Tsukimi made forty dolls for an empty school. She staged them to look like they were having undokai, a traditional school sports day. 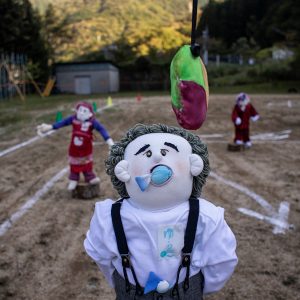 The dolls are made of wood and wire and stuffed with newspaper. People all over Japan donate clothes for them. There are “people” in the stores, a man taking a cigarette break, and some just walking down the street. She made a fisherman that she put in a boat on the lake. And a woman sitting in a wheelchair. There is even a community center.

Nagoro is about an hour and a half down the mountain from the nearest town. There are no stores in Nagoro. The residents grow their own food. Tsukimi hosts doll-making lessons and a doll festival for tourists. People volunteer to come help stage the dolls for the festival. The village, although hard to get to without a guide, has become a tourist attraction.

Although Tsukimi’s dolls were a labor of love to combat loneliness, Nagoro’s dolls look like something out of a horror movie. The random figures frozen place give the village a decidedly unsettling feeling. Tsukimi gave the dolls their own expressions, and some of them look frozen in fear or very menacing. It’s the kind of place that looks like it should be haunted by the ghosts of people murdered by the dolls.