The Scary Matter team is crazy about horror B-movies. We all get extremely excited when we find one. We’re like children on Christmas. “So bad it’s good” movies are having a moment. Just hit up any streaming service and look at each one’s growing list of crap. It’s crap that we all can’t get enough of. One name you’ll keep seeing over and over is Mark Polonia. 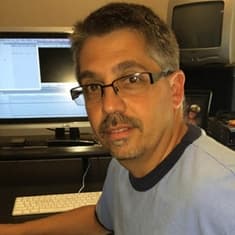 Not every movie has to be spooky, scary, or gory.  When a horror director’s movie gets trashed by critics, most directors will get upset and go back to the drawing board. They want their movies to terrify audiences. But not Mark!  He understands the need for bad movies.  And it doesn’t look like he plans on stopping – lucky for us!

Mark and his twin brother John were born on September 30, 1968. Starting when they were young, they shared a love of grindhouse horror movies and filmmaking. When they were eleven they wrote a script called “The Night Johnny Came Home”. They made it using a Super 8 camera and entered it in a film contest at The School of Visual Arts in New York City. The school reportedly lost the film. They started making movies as teenagers starring them and their friends. They made them in whatever locations they could get to and with almost no budget. The scripts were simple and the effects were terrible, but it was the beginning of the movie career of  Polonia Brothers Entertainment.

In 1987, they released a straight-to-video movie called Splatter Farm. It’s pretty bad and gory but in a good way. It’s a homemade splatter fest. The acting is horrible and the plot is thin, but there’s an admirable plot twist at the end. Twins visiting their elderly aunt (a necrophiliac who also might have a thing for one of the boys) think something is going on with her handyman. Of course, there is and it’s nasty! All in all, it’s a fucked up movie!

In 1996, the Polonia Brothers and company made an alien invasion movie called Feeders. Thanks to the success of 1996’s invasion movie Independence Day, Blockbuster Video put Feeders in their stores. It became Blockbuster’s most rented independent film in 1996. Not bad for a group of teenagers! One of the stars of Feeders was actor/director John McBride, who became a frequent collaborator with the brothers.

The Polonia Brothers produced a string of straight-to-video movies over the next twenty years, including (just in time for the holidays) – Feeders 2: Slay Bells. The brothers are mad geniuses! They never strayed from their formula of low-budget shoots and effects. Many of them have reached cult status today. Sadly, in 2008, John Polonia passed away at thirty-nine from a heart aneurysm.  Losing his identical twin and business partner must have been soul-crushing. In 2009 Mark released HalloweeNight, a movie previously made with John. Then he took some time to mourn his loss. 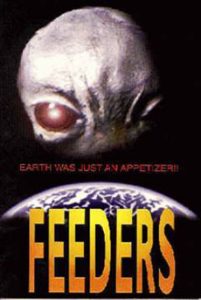 Mark is not one to be kept down. He started releasing movies again in 2011 with E.V.E of Destruction, although the frequency of his movies slowed. But Mark’s love of horror and making movies was still there, and soon he was back with a vengeance.  Sharks, monsters, zombies – he does them all! They’re all combined with the absolute most ridiculous titles like Sharkenstein. These are the movies that we watch based on nothing but the title.  Which is why I watched Sharkenstein and loved it!

Something new that he’s been doing over the last few years is producing “mockbusters”. He takes films like The Amityville Horror and expands on them in his own style. He’s made several movies using the Amityville legend, starting with Amityville Death House.  Amityville in Space is supposed to be released this year and I can’t wait! Mark’s choice to ignore the bad reviews and continue to make movies in his own way (with and without his brother) is admirable. His motto is “…life is too short to take seriously so you might as well have a good time”. He has stayed true to the Polonia Brothers’ original trademark of low-budget shoots, puppet-like creatures, and low-tech special effects. The world is a stressful place with a lot going on. There’s a reason that we all seek out the “so bad it’s good” movies. Everyone needs a little mental floss. And Mark Polonia is ready to give it to us!