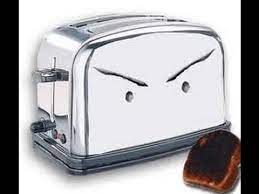 Sometimes when I’m trolling the internet I find a story that is so far-fetched I want it to be true! The concept of having something haunted in your house is not a pleasant one. We’ve all seen the possessed dolls, and you’ve read about the haunted objects we post here on Scary Matter. But so far, I think this one is my favorite. They say that breakfast is the most important meal of the day. It fuels you up and gets you going. But for June O’Brien, it’s a different story. June claims that she has a possessed toaster. 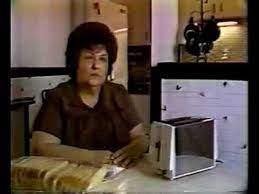 In 1984, June made a call to the news looking for an interview. She said that her toaster was possessed by the devil and she thought the world should know. Now I’m not saying that she’s lying about her evil appliance, but…this is a tough one to swallow. But of all the ridiculous “possessed” items that I’ve seen – this is one that I truly want to believe in! And I want to make toast in it.

June was interviewed in 1984 by a  reporter named Richard Dominick. At the time he was a reporter for The Sun, a British supermarket tabloid. Dominick’s thing was paranormal stories. If someone had a ghost, haunted object, or alien experience – Richard was on it (I want his job). In 1988, a reporter named Boyd Matson was looking for stories to include in a piece about outrageous tabloid stories. Richard Dominick was a goldmine for him. 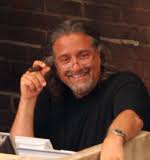 Dominick took Matson to meet some of the people he had done stories about…and I want to meet all of them! They spoke to a woman who says she was regularly abducted by aliens and passed around the spaceship for sex and a man who claims to have fallen through the ice and was rescued by a Howdy Doody ventriloquist dummy. And June O’Brien and her toaster.

According to June, a voice came out of the toaster that said “I am the devil”. She said the voice sounded like Eli Wallach (an old movie star). She must have been super hungry because she used it anyway. According to June, the toaster would randomly shoot flames out of it and print things like “Satan Lives” on the toast. Sounds like a fun way to start the day. 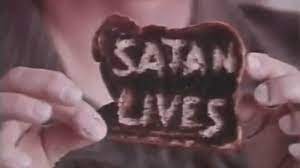 June wanted to demonstrate the toaster for Dominick. Fortunately, she happened to have a loaf of bread handy. Apparently, Satan was not feeling it. June had trouble getting the bread into the toaster and when she finally did – a burst of flames shot out. Sadly, Satan had nothing to say. 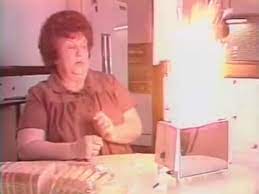 Normally when someone has a “possessed” object in their house they want to get rid of it as soon as possible (Or keep it for the publicity). So why did sweet June O’Brien keep a toaster that’s supposedly possessed by the devil? You’ll have to click the link at the bottom of the page to find out. The last line of the interview is priceless! 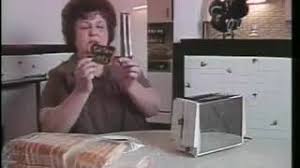 And of all the things in the world – why the hell would Satan possess a toaster? If anyone has thoughts on that we’d love to hear them!