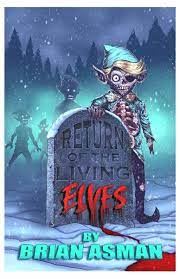 The Return of the Living Elves

There’s a lesson to be learned in this book my friends…don’t wait until Christmas Eve to buy your girl a present!

Yes, you read the title right! I know that you’re all prepping for the holidays – but don’t forget to make time for yourselves. Curl up with a good Christmas story. Maybe try one about zombie elves! Yes, that’s right! Author Brian Asman knows how to blend violence and gore with a bunch of laughs. In The Return of the Living Elves. Asman blends The Return of the Living Dead with Christmas. It’s the crossover story I never knew I needed.

Tommy just got hired at the Whosgotta Christmas supply warehouse. His boss Jimmy is trying to help him find a last-minute gift for his girlfriend. They accidentally unleash a long-forgotten genetic experiment with a taste for human flesh (whose name is Elfphonso). Soon the town is overrun with elf-zombie hybrids, forcing Tommy (who wore his Jugaloo makeup to the interview) and Jimmy to fight for their lives. I refuse to tell you anything else.

Brian Asman is crazy in the best way possible. You have to admire a man who watches The Return of the Living Dead and thinks to himself “I should write a Christmas version of this”. I don’t know what led him to this, but I’m hoping to ask him one day! The book starts out with Asman’s own version of ‘Twas the Night Before Christmas. The poem gives you a glimpse into the kind of writing that you’re about to experience.

Asman has created an entire political structure around the holidays. His take on holiday character names had me chuckling at each one. He doesn’t shy away from the gore that comes along with a zombie army. And he describes the zombies in beautiful disgusting detail. Some things were ripped straight out of the Return movie and he’s not afraid to admit it. Asman fills the book with a US president (I got a good laugh out of that one), Clauses, Kringles, zombies, a secret army, reindeer with ball gags, and some Santa lore to top it all off.

The book is funny and smart. He loves good puns and isn’t afraid to use them. Once the action gets started he keeps it going at a pretty good pace. You may be asking yourself – “In a book about elves did he use the Elf on a Shelf?” – why yes dear readers..he does! The book is an homage to The Return of the Living Dead infused with pop culture references and a healthy dose of blood, guts, and gore.

Elfphonso, the head of the zombies, is a delightfully evil elf on a mission. He has only one thing on his mind – creating a zombie army. And he’ll do whatever it takes to make one. The Clauses and the Kringles are desperate to stop him.

Return of the Living Elves is a really fun read. It’s comedy, horror, and WTF all rolled into one. At only one hundred sixty pages it’s a quick and easy read. So put your holiday-weary feet up and give this book a try.