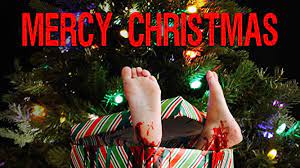 Have you ever wondered what it would be like if Texas Chainsaw Massacre was a Christmas movie?  Neither have I. But thanks to 2017’s Mercy Christmas, I think I have a pretty good idea!  Going into it I honestly thought it was going to be another bad attempt at a horror/comedy, but it certainly proved me wrong! 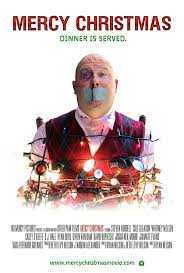 Michael Briskett is the guy in the office that blends in with the furniture. He spends all his time in his cubicle and has no friends. His boss gives him a massive project right before Christmas…and it’s due December 26th. To add insult to injury, no one came to his Christmas Eve party. Until at the last minute, an unexpected guest arrives, with intentions that are not so merry. The two-person party is such a good time that Michael gets an invitation to Christmas dinner with the family. He was going to be alone so he happily accepted. 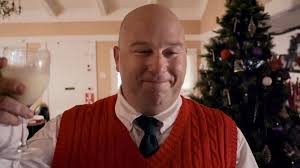 His dreams of the perfect Christmas dinner are shattered when he passes out at dinner. When he comes to, he is tied up in the basement with three other people. They’re surrounded by blood-stained plastic curtains. No one knows what’s happening or why they’re there. The only thing they have in common is that they all have no friends.  It turns out that THEY are Christmas dinner.

Writer/director Ryan Nelson and his writing partner/wife Beth Levy Nelson have come up with a movie to make you laugh, cringe and sing “The 12 Days of Christmas” all in less than two hours. Mercy Christmas is a crowd-funded movie based on Ryan’s 2010 short film of the same name. Ryan and Beth took their blended family traditions (He celebrates Christmas and Beth celebrates Hanukkah) and kicked them up a ridiculous notch! 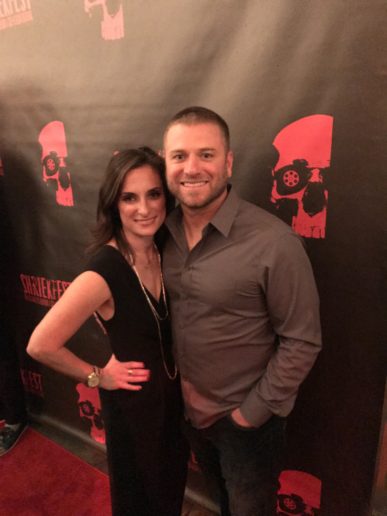 The dialogue in this movie is great. I loved how the conversations that the family has as they torture their victims are so normal. They talk about things like making dinner, and football. They even go to church!  To them what they were doing was second nature – just another family Christmas. The acting is ok, but I thought Steven Hubbell did a fabulous job as Michael. As soon as I saw him I got that “Oh my God I feel so bad for him” feeling.

Mercy Christmas is an underappreciated horror/comedy.  It has a lot of dark humor and I  got a few good laughs. There’s a string of Christmas lights that has a starring role as far as I’m concerned. The last twenty minutes or so are fantastic. It’s messed up, violent, and pretty damn funny! Ryan and Beth Nelson make a great team and I’m looking forward to seeing what they do in the future. This is definitely worth checking out while you’re waiting for Santa.