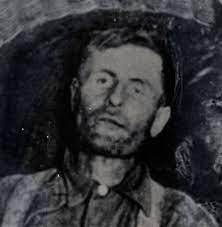 Do you like Westerns? I don’t, but if you do you may find this story extra interesting. Elmer McCurdy was born back in the time of gunslingers and train robbers. McCurdy led a typical gunslinger life. And as with many of them back in those days – died in a shootout. What nobody expected was what happened to him afterward…

McCurdy was born in Maine in 1880 to seventeen-year-old Sadie McCurdy. He was adopted by Sadie’s brother George and his wife Helen. After George died, Sadie told him that she was really his mother. She said that she didn’t know who his father was. Elmer was not happy about it. He was in his teens and started drinking regularly. When he was older, he moved in with his grandfather and became a plumber. 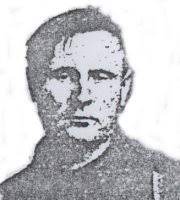 In 1900, McCurdy’s mother and grandfather both died. He became a drifter – drinking his way around the country and picking up odd jobs wherever he went. In 1907, he joined the Army. He was trained in machine gun use and how to use nitroglycerin in demolition. He was discharged from the Army in 1910. He hooked up with an Army buddy and started planning robberies. They were both arrested that same year on charges of possessing burglary tools. They claimed the tools were for building a foot-operated machine gun that they were trying to invent. They were found not guilty.

After trial, McCurdy and his friend took the tools and proceeded with their actual intended use – robbery. McCurdy decided to try to use his demolition training in the jobs. He wasn’t very careful, nor was he very good at it. So he moved to Oklahoma and decided to try again. This time he recruited three men to join him.

McCurdy heard that the 104 train on the Iron Mountain-Missouri Park railroad was carrying a safe with four thousand dollars. They decided to rob it. The only thing they managed to do right was to stop the train. McCurdy used too much nitroglycerin and blew up the safe. The only money left was about four hundred and fifty dollars in silver.

After the botched robbery, McCurdy hid in a barn for a bit. Then he heard about another train that was supposed to be carrying four hundred thousand dollars. The robbery went well, except for the fact that he robbed the wrong train. All he got from that job was a couple of jugs of whiskey, about forty-six dollars, and some random items he took from the passengers. Not exactly what he was hoping for.

So, back into hiding he went. He had garnered enough attention to himself that his crew abandoned him and a two thousand dollar bounty was put on his head. On October 7, 1911, he was tracked by a sheriff with a pack of bloodhounds. They found him hiding in a haystack. A gun battle followed which lasted over an hour. When it was over – Elmer McCurdy was dead. But his story doesn’t end there… 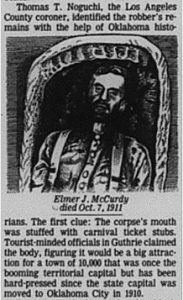 McCurdy’s body was taken to a funeral home but no one claimed his remains. But the mortician wanted to get paid. He embalmed him using a preservative that contained arsenic. This kept the body from decomposing and kept it looking lifelike. This was a common practice for unclaimed bodies back then. Funeral director Joseph L. Johnson put the corpse on display in the funeral home. He propped the coffin up so that McCurdy stood with his rifle and called him “The Bandit Who Wouldn’t Give Up”.  Johnson charged people five cents to see the body and had visitors drop the coins into McCurdy’s mouth. And that’s where McCurdy stayed for the next five years. 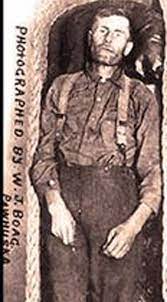 Word got around and “The Bandit Who Wouldn’t Give Up” started bringing big crowds and money. Back then traveling carnivals were a big thing, and carnival organizers started approaching Mr. Johnson about buying the corpse. Mr. Johnson was making too much money to sell him to someone else. Unfortunately for Mr. Johnson – McCurdy’s brothers eventually came to claim the body and Mr. Johnson lost his meal ticket.

It turned out that McCurdy’s “brothers” were not his brothers. They were a couple of carnival workers named Charles and James Paterson.  The Patersons added McCurdy to their sideshow and hit the road. Between people’s fascination with the stories of the “Old West” and their morbid curiosity, McCurdy was a hit. During his stint on the carnival circuit, McCurdy had many nicknames:

McCurdy then went to Hollywood. He was on display at showings of the 1933 drugstploitation film The Narcotic. His body was put on display and labeled as a “dead dope fiend”. He was also used as a prop in the movie She Freak (1967). His Hollywood appeal faded and he was lent to a traveling sideshow near Mt. Rushmore. He was transported on top of a truck and suffered extensive wind damage.was sold to the Hollywood Wax Museum but was in such bad condition they never put him on display. Then he went to the Queen’s Park Laff in the Dark Funhouse in California. He was hung up as a prop and forgotten about. By now – people forgot he was an actual person. 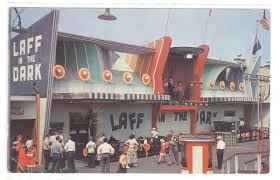 During the filming of the show, The Six Million Dollar Man in 1976, the art director found McCurdy’s corpse. It was sprayed with glow-in-the-dark orange paint and hung from a noose around its neck.  The dummy was swinging in the air because of vibrations from the cars going through the funhouse and its arm came off. A crew member picked it up and saw that it had a human bone inside of it. So they called 911 to report a corpse in the funhouse.

The body was sent to the coroner who found an antique bullet lodged in his body. He weighed about fifty pounds and was five foot three inches. He was missing most of his ears, hair, and some of his fingers and toes. Someone had drilled a hole in his neck to attach the noose. After the noose was removed, yellow ooze started to come out of the holes. Tickets to the Museum of Crime and a penny from 1924 were found in his mouth.  After a subsequent investigation, Elmer McCurdy’s remains were finally identified.

McCurdy’s corpse had suffered damage over the years. He still had a little bit of hair, but most of his ears and several fingers and toes were missing. 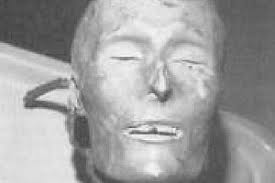 In 1977, McCurdy was finally buried. The funeral was attended by over three hundred spectators. To prevent any grave robbers from getting their hands on him, his coffin was covered with several hundred feet of concrete. He was fittingly buried near the outlaw Bill Doolan. Their bodies were once on exhibit together. 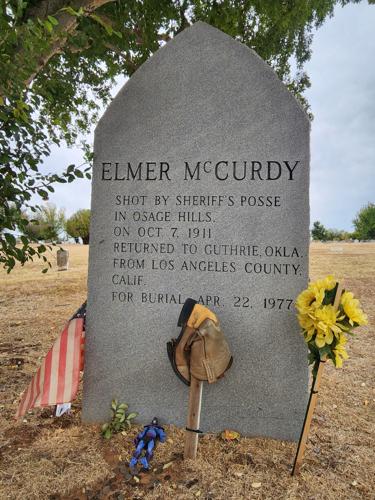